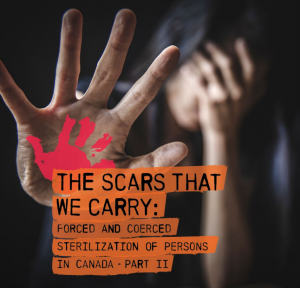 The federal government should compensate and apologize to all people who were subjected to forced and coerced sterilization, the Senate Committee on Human Rights said in a report released Thursday, July 14, 2022.

The report, The scars that we carry: Forced and Coerced Sterilization of Persons in Canada – Part II, outlines the committee’s findings from the second part of its study into this deeply disturbing practice, which persists today and disproportionately affects vulnerable and marginalized groups in Canada, including Indigenous women, Black and racialized women, and people with disabilities.

The BCCFP is committed to promoting cultural safety and humility in the practice of family medicine. Raising awareness of the history of forced and coerced sterilization in Canada, and of the ongoing racist and discriminatory attitudes that continue to effect the reproductive rights of marginalized women is just one way that we are working to improve culturally safe care in BC.

The Senate report is the result of multi-year study of the extent and scope of forced and coerced sterilization of persons in Canada, hearing from experts and civil society groups. The committee released its first report on the subject in June 2021.

In 2022, the Committee heard additional testimony on this issue, including from several survivors who courageously shared their stories.

Survivors described how they were stripped of their ability to conceive without their free, prior and informed consent at moments of extreme vulnerability. Some were as young as 14 and coerced through confinement, manipulation or threats; others were simply not consulted before the procedure. Many survivors attributed their sterilization to racism in Canada’s health-care system.

Canada has a long history of forced and coerced sterilization. For much of the 20th century, laws and government policies explicitly sought to reduce births in First Nations, Métis and Inuit communities, Black communities, and among people with intersecting vulnerabilities relating to poverty, race and disability. Though these explicit eugenic laws and policies have been repealed, the racist and discriminatory attitudes that gave rise to them are still present in Canadian society, and forced and coerced sterilization still occurs.

Forced and coerced sterilization of Indigenous Peoples will be the focus of the BCCFP’s next Cultural Safety and Humility Webinar, on September 29, 2022.

This entry was posted in News. Bookmark the permalink.